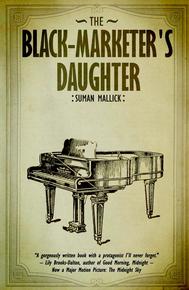 ​​​​​​​​​​Zuleikha arrives in the US from Lahore, Pakistan, by marriage, having trained as a pianist without ever owning a real piano. Now she finally has one—a wedding present from her husband—but nevertheless finds it difficult to get used to her new role of a suburban middle-class housewife who has an abundance of time to play it.

Haunted by the imaginary worlds of the confiscated contraband books and movies that her father trafficked in to pay for her education and her dowry, and unable to reconcile them with the expectations of the real world of her present, she ends up as the central figure in a scandal that catapults her into the public eye and plays out in equal measures in the local news and in backroom deliberations, all fueled by winds of anti-Muslim hysteria.

The Black-Marketer's Daughter was a finalist for the Disquiet Open Borders Book Prize, and praised by the jury as a "complicated and compelling story" of our times, with two key cornerstones of the novel being the unsympathetic voice with which Mallick, almost objectively, relays catastrophic and deeply emotional events, and the unsparing eye with which he illuminates the different angles and conflicting interests at work in a complex situation. The cumulative effects, while deliberately unsettling to readers, nevertheless keeps them glued to the pages out of sheer curiosity about what will happen next.

​"A powerful debut, sure-footed and tender. Mallick takes us on a journey that deftly slips in and out of disparate expectations, cultures, and desires, showing us the spaces in between. A gorgeously written book with a protagonist I'll never forget."

​"The Black-Marketer's Daughter is a beautifully written tale of womanly courage and love, embellished with the poetry of Omar Khayyam. Although male, Suman Mallick has written exquisitely from a woman’s point of view to give us Zuleikha, a fanciful young Pakistani woman in an arranged marriage in America, and her story makes this concise, riveting book a love letter to all domestic violence victims, especially Muslim women. This finely wrought novel offers redemption and a way out from under the patriarchal religious dogma that purports to exalt women but in fact degrades the female sex. I highly recommend this book!"

~ Sherry Jones, internationally bestselling author of The Jewel of Medina

"In The Black-Marketer’s Daughter, Mallick employs careful, measured prose to convey a punishing story: that of a Muslim woman, disoriented and alone in America, who slips further and further into the gears of a society built on misogyny and self-interest. Ultimately, her strongest advocate may be the perception and empathy Mallick brings to revealing the harrowing truth of her situation."

~ Dan DeWeese, author of Gielgud and You Don't Love This Man

"The Black-Marketer's Daughter is a key-hole look at a few things: a mismatched marriage, the plight of immigrants in the U.S., the emotional toll of culture shock, and the brutal way Muslim women are treated, especially by men within their own community. Titling it—defining the heroine by her relationship to a man rather than as a woman in her own right—suggests how deeply ingrained that inequality can be."

​"Mallick offers an impressively realistic depiction of a woman caught between tradition, family, and her own sense of empowerment."

​"The Black-Marketer's Daughter  is the portrait of a woman who endures violence, intimidation, xenophobia and grief, and yet refuses to be called a victim. In this slender novel, Suman Mallick deftly navigates the funhouse maze of immigrant life in contemporary America—around each corner the possibility of a delight, a terror, or a distorted reflection of oneself."

"This novel reminds us that our lives spring from cultural traditions we must either escape or embrace.  With rich language and a keen eye for the details of a small enclave in North Texas, Suman Mallick reveals a complex world hidden within American society."

"In The Black-Marketer's Daughter, Suman Mallick explores the myriad systems by which this world further entraps victims of violence--the law, the mosque, the marriage--and offers us a way through."